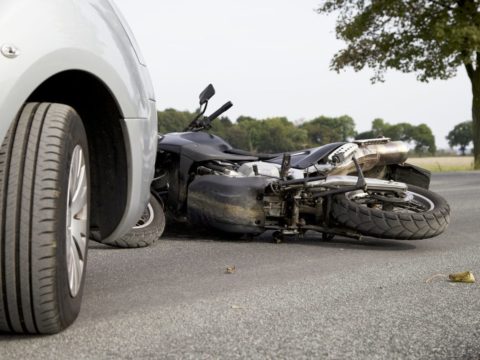 The way we think of post-traumatic stress disorder (PTSD) doesn’t always line up with the condition’s reality. For instance, it’s common to think of it as something that happens only to soldiers who just returned from the battlefield and saw unspeakably inhumane acts. It is true that a significant chunk of veterans from conflicts in Vietnam, Iraq, and Afghanistan returned home with PTSD, but it’s not true that you have to go through a literal war in order to get diagnosed.

It’s helpful to think about the physical differences between a motorcycle and a sedan or SUV. Motorcycles are smaller and lighter, and they don’t enclose the rider in a metal structure the way that a car does. Let’s imagine two car similar car accidents: in the first one, the driver of a midsize sedan gets t-boned at an intersection by a pickup truck that ran a red light. That’s a scary experience, but there’s a good chance the driver was using a seat belt that kept him or her from getting thrown from of the car. Nationwide, 90 percent of people in cars use seat belts, and there’s significant evidence to suggest they can and do save lives.

But a motorcycle leaves you more exposed to danger. If you have a motorcycle, you can and should wear a helmet and other protective gear, but if you get rear-ended by the same pickup truck at the same intersection, there’s not much to keep you from flying over the handlebars and into the asphalt. That’s going to be a more visceral experience than what happened to the driver of the sedan mentioned above. You’ll remember things like the concrete scraping against your skin, or the crunching noises you heard when you hit the pavement. A motorcycle accident is much more likely than a car accident to result in either death or serious injury. Motorcycle accident survivors may find themselves needing surgery, rehab, and even dental work like TMJ splints.

The motorcycle industry is changing in an effort to attract new riders, but there’s still a significant portion of riders who are drawn to motorcycles for their powerful image. A heavy dose of machismo can come out when you’re hanging with your buddies and talking Harley-Davidsons. That leads some people to feel like they must act tough and never show weakness. To some people, especially men, getting treatment for PTSD is seen as “weak.” They may also believe the pernicious myth that you have to go through extreme suffering to experience mental health issues, and a motorcycle accident doesn’t feel “extreme” enough.

But trauma is a stubborn thing. It has a way of coming out one way or another, and it can affect your relationships with friends and loved ones. Some people with PTSD only get help after a spouse gives them an ultimatum to either seek treatment or move out. It’s best to get treatment because you want to, not because you fear losing a relationship, but getting help late is better than not getting it all.

If you’re suffering from PTSD and are worried about paying for mental health care, look for motorcycle accident lawyers who will give you a free consultation. If the other driver was reckless or negligent, you may be able to recover both the costs of your medical bills and the cost of therapy and other treatments for your PTSD. Getting damages for pain and suffering isn’t a slam dunk, though, so you’ll want to make sure to discuss your case with an experienced lawyer before deciding to sue the driver who caused your motorcycle accident.