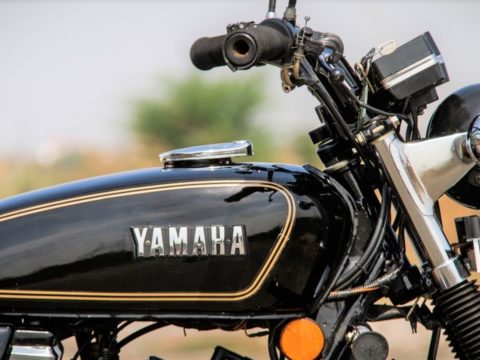 India is a country where the sheer numbers of two-wheelers outnumber other vehicles on the road. There is a rich history of motorcycles and scooter spanning over 4 decades. During this time there have been some beautiful machines which have graced the roads. If you are on the lookout for a work of art from the yesteryears, very few are as iconic as the Yamaha RX100, which was instrumental in changing people’s views on smaller displacement motorcycles.

The bike was sold with huge success for over a decade and became the number one choice for the daily commuter. It gave a solid performance and great fuel efficiency without costing an arm and a leg. The motorcycle has, however, been out of production for over two decades now, but there are still a few of these running around. It may be tough to find this bike, but you will cherish it if you can get your hands on one.

There are also motorcycle savants who have restored some of these models to their former glory and have made them look even better than before. With custom colour schemes and specialized wheels, these bikes look different from any other motorcycle on the road. Even if you can get your hands on an old and broken down RX100, you can invest some money and turn it into a one of a kind machine.

When it was first launched, the RX100 came in three colours, cherry red, peacock blue-green and black. Today it can be customized to multiple colours, giving it a unique look and one that suits your personality. The most popular choices today include, giving it a matte black finish and a gunmetal grey trim, along with black accents.

The bike originally came with wheel spokes; chrome finished front fender and exhausts. Today’s custom models see a change in the wheels, fenders and bodywork. There are also LED DRLs and projector units. The idea behind the modifications and not repairs is that the motorcycle should look the part of an ageless wonder, and yet carry futuristic elements to help not be an out-dated machine.

The Yamaha new RX100 came with a 98 cc, single-cylinder, two-stroke engine that delivered around 11bhp at 7500 rpm. The bike also gave a peak torque of 10.39 NM at 6500 rpm. With a  kerb weight of just under 103 kilograms, the RX100 was one of the fastest machines back then and can still give today’s four-stroke cycles a run for their money. Today’s modified models carry improved performance upgrades and they can easily tear up the roads today.

If you have always wanted to ride a machine, which can turn heads and make people wonder what bike that was, get your hands on an RX100.The restoration that it might require will be totally worth it. You will also be the only one with a bespoke machine riding around the streets. The Yamaha RX100 is one of the older motorcycles, which are known to be a little loud and fast, perfect for making your presence known.