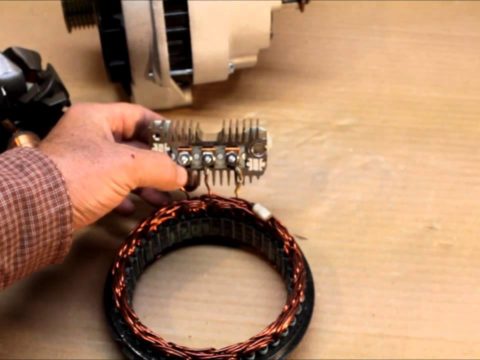 It’s a nightmare scenario for most motorists: you’re driving along, probably alone late at night, when one-by-one the electronic elements of your car begin to fail.First it’s the radio, and then it’s the headlights.If your engine starts to miss, you’re going to be in trouble.On first suffering these unfortunate symptoms, you might suspect that it’s the car’s battery is at fault.And you’d be at least partially right, because it would be the battery running out of power that eventually kills your car.But it’s not the battery itself that’s to blame, but the device that’s tasked with keeping it fully charged: the alternator.

What is the alternator?

Alternators generate current using the principle of electromagnetic induction made famous by Michael Faraday in the 19th century.This physical effect occurs whenever a magnet passes beside a coil of wire:a current is generated inside the wire, which in turn is used to charge the battery.

In the case of an alternator, these coils are placed around a central chamber called a stator, into which the rotor itself sits.These coils are triangular, and spaced around the edge of the stator in an alternating pattern.This means that the motion of the rotor assembly will induce a current.

Where is the alternator?

Near the front of your car you’ll typically find the alternator.Here, it’s in the best possible position to transform the motion of the crankshaft.Depending on the age of your car, it’ll either be driven using a drive belt which attaches the crankshaft to a separate pulley especially for the alternator, or with a serpentine belt that drives each component the relies on crankshaft at the same time.

The alternator is usually around the size of a brick.It’s housed in a non-magnetic material, usually aluminium, to shield the surrounding components.Since aluminium is also an excellent conductor of heat, this helps to conduct heat away from the centre of the device, which is capable of generating quite a lot of it.You’ll also recognise vents on both sides, which serve the same purpose.

What connections are on the alternator?

On the rear of the terminal you’ll find up to five terminals.The are there to sense the voltage of the battery, to turn the device’s built-in voltage regulator using the ignition switch, to activate the warning lamp, to bypass the regulator, and to connect to the battery itself.Of course, if you’re not a mechanic, it’s not necessary to know what each of these connections does – it’s sufficient to simply know that the alternator is the small device with five connectors on it, one of which leads to the battery.

If the voltage outputted to the battery is too much or too little for it, then the battery might be damaged.For this reason, alternators come with a device called a voltage regulator built-in.It’s the role of this object to fix the output of the alternator at the same voltage as the battery – which is why the two need to be connected via a separate cable, which is used to determine the correct voltage to send through the main cable.

While modern cars use and alternator, older ones used an altogether different sort of generator:a dynamo.This device worked via an entirely different means, and produced a direct current which could be connected directly to the battery.A modern alternator, on the other hand, produces an alternating current.This must be transformed into a DC signal via a device known as a rectifier.This consists of a few diodes and capacitors which prevent electricity from travelling in on direction, and then flatten out the peaks of the electricity that flows in the other until the signal is smooth and clean.

Why do alternators fail?

Because alternators contain moving parts, they’re vulnerable to wear and tear.The most common points of failure are the bearing whose role it is to absorb the shock of rotation – the bearings.A combination of friction and small particles can cause these to fail – and when that happens, the alternator is dead.

What should I do when my alternator fails?

Alternators are not designed to be repaired, but replaced.Be sure before doing so that the belt hasn’t worn out – a bad belt will impinge an alternator’s ability to work properly – and it’s more easily and cheaply replaced than the entire unit.You can buy alternators from specialist online stores to suit a range of vehicles.Ford, Audi and Vauxhall alternators are all available, among others.